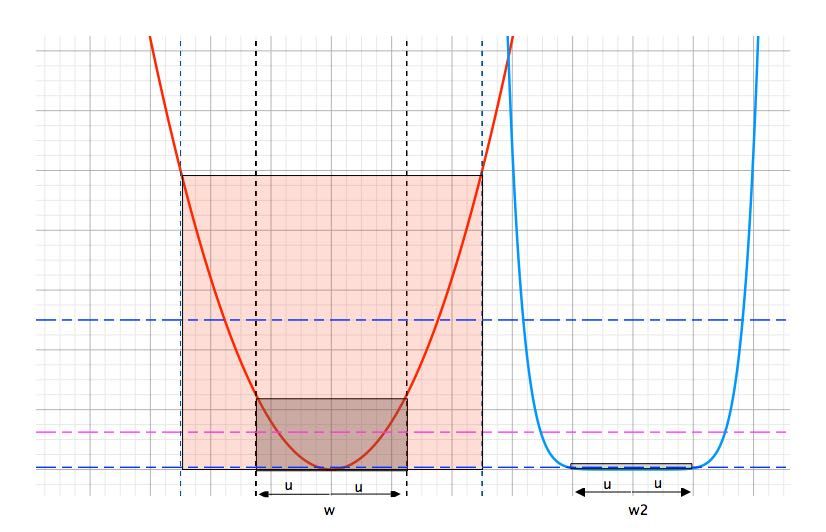 It has been empirically observed that different local optima, obtained from training deep neural networks don't generalize in the same way for the unseen data sets, even if they achieve the same training loss. Recently, this problem has received renewed interest from both the empirical and theoretical deep learning communities. From the theoretical standpoint, most of the generalization bounds developed for explaining this phenomenon only consider a worst-case scenario, thus ignoring the generalization capabilities among different solutions. In this blog we are interested in the following question:

How is the model generalization related to the local "smoothness" of the solution?

We discuss several related proposals and introduce our recent work that builds a connection between the model generalization and the Hessian of the loss function.


Empirical Observations on Hessian and Generalization

Hochreiter and Schmidhuber, and more recently, Chaudhari et. al. and Keskar et al. argue that the local curvature, or "sharpness", of the converged solutions for deep networks is closely related to the generalization property of the resulting classifier. The sharp minimizers, which led to lack of generalization ability, are characterized by a significant number of large positive eigenvalues in \(\nabla^2 \hat{L}(x)\), the loss function being minimized.

Neyshabur et al. point out the sharpness itself may not be enough to determine the generalization capability. They argue that it is necessary to include the scales of the solution with sharpness to be able to explain generalization. To this end, they suggest an "expected sharpness" based on the PAC-Bayes bound: $$E_{u\sim N(0,\sigma^2)^m}[\hat{L}(w+u)] - \hat{L}(w)$$ As shown in the figure below, intuitively if the local minima is "smooth" then perturbing the model won't cause the objective to change much. Thus it provides a way of measuring the smoothness of the local minima.

How to Perturb the Model?

It is well known that adding noise to the model during training can help improving the model generalization. However, how to set proper noise levels remains unknown. Most state-of-the-art methods assume same level of perturbation along all directions, but intuition suggests that this may not be appropriate.

Let's look at a toy example. We construct a small 2-dimensional sample set from a mixture of \(3\) Gaussians, and binarize the labels by thresholding them from the median value. Then we use a \(5\)-layer MLP model with only two parameters \(w_1\) and \(w_2\) for prediction, and the cross entropy as the loss. The variables from different layers are shared. Sigmoid is used as the activation function. The loss landscape of a model trained using \(100\) samples is plotted below:

If we look at the optima indicated by the orange vertical bar, the smoothness of the loss surface along different directions is quite different. Should we impose the same level of perturbations along all directions? Perhaps not.

A Metric on Model Generalization

As discussed by Dinh et al. and Neyshabur et al., the spectrum of Hessian itself may not be enough to determine the generalization power of a model. In particular, for a multi-layer perceptron with RELU as the activation function, one may re-parameterize the model and scale the Hessian spectrum arbitrarily without affecting the model prediction and generalization.

Even though we assume the local convexity in our metric, in application we may calculate the metric on any point on the loss surface. When \(\nabla^2_i \hat{L}(w^\ast) + \rho(w^\ast)\sqrt{m}N_{\gamma,\epsilon}(w_i^\ast) < 0\), we simply treat it as \(0 \). The metric is plotted as the color wrapped on the surface in the figure below. Landscape of the loss on a \(2\)-parameter \(5\) layer MLP with shared parameters. The colors over the loss surface indicate the metric of generalization. Lower metric score indicates better potential generalization power. The colors on the bottom plane indicate an approximate generalization bound considering both the loss and the generalization metric.
As displayed in the figure, the metric score around the global optimum, indicated by the green vertical bar, is high, suggesting possible poor generalization capability as compared to the local optimum indicated by the red bar.

On the other hand, the overall expected loss is determined by both the loss and the metric. For that we plotted a color plane on the bottom of the figure. The color on the projected plane indicates an approximated generalization bound, which considers both the loss and the generalization metric. The local optimum indicated by the red bar, though has a slightly higher loss, has a similar overall bound compared to the "sharp" global optimum.

Reconstruction from the Model

In order to get a quantative evaluation of the local optimum and the model perturbation, we need to look at the PAC-Bayes bound:

PAC-Bayes bound suggests we should optimize the perturbed loss instead of the true loss for a better generalization. In particular, the level of perturbation on each parameter is set according to the local smoothness property. We observe improved performance for the perturbed model on CIFAR-10, CIFAR-100, as well as the tiny Imagenet data sets.

We connect the smoothness of the solution with the model generalization in the PAC-Bayes framework. We theoretically show that the generalization power of a model is related to the Hessian and the smoothness of the solution, the scales of the parameters, as well as the number of training samples. Based on our generalization bound, we propose a new metric to test the model generalization and a new perturbation algorithm that adjusts the perturbation levels according to the Hessian. Finally, we empirically demonstrate the effect of our algorithm is similar to a regularizer in its ability to attain better performance on unseen data. For more details, including details regarding the proof and its assumptions, please refer to our pre-print.