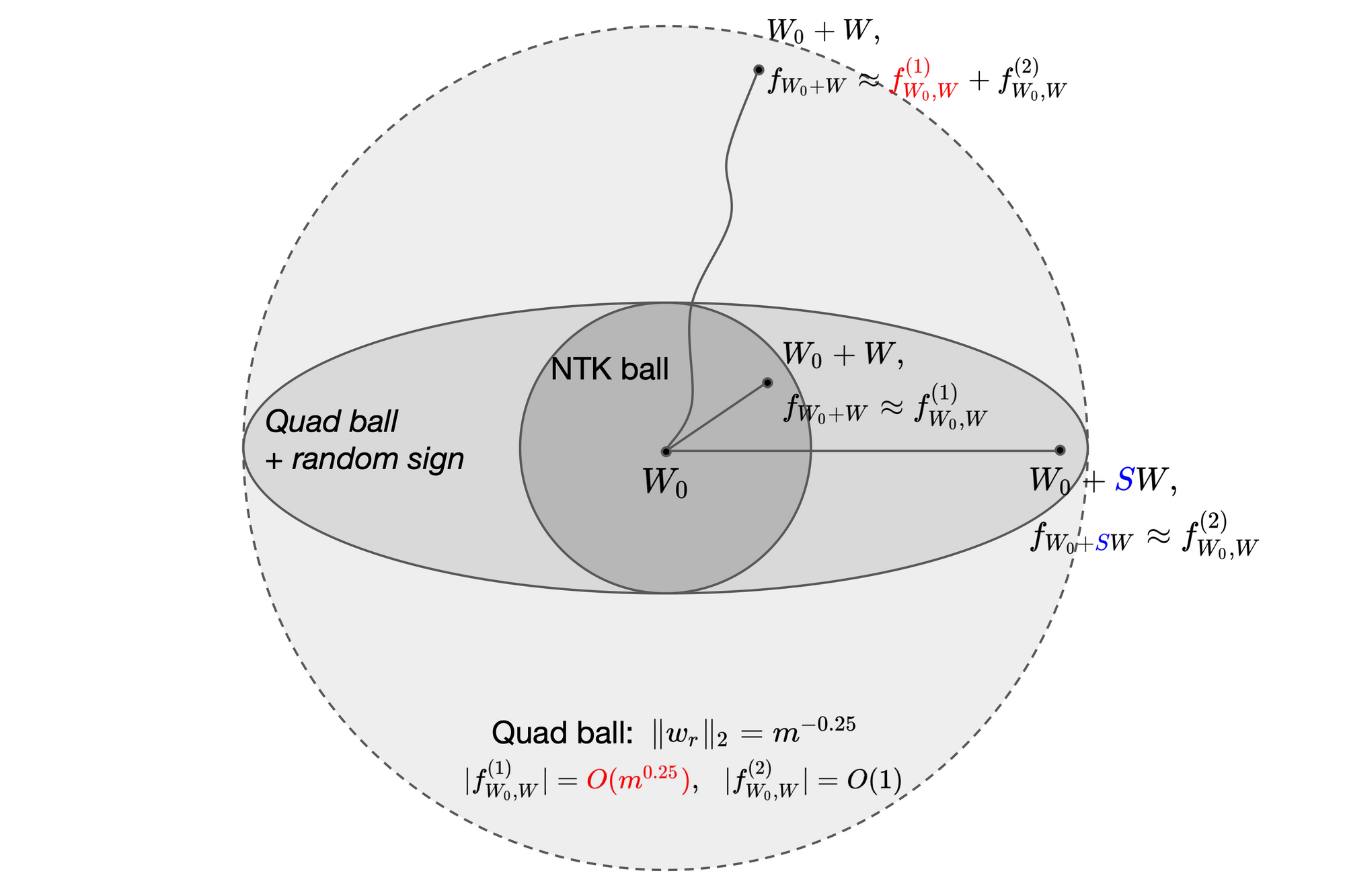 When are Neural Networks more powerful than Neural Tangent Kernels?

The empirical success of deep learning has posed significant challenges to machine learning theory: Why can we efficiently train neural networks with gradient descent despite its highly non-convex optimization landscape? Why do over-parametrized networks generalize well? The recently proposed Neural Tangent Kernel (NTK) theory offers a powerful framework for understanding these, but yet still comes with its limitations.

In this blog post, we are going to explore how we can analyze wide neural networks beyond the NTK theory, based on our recent Beyond Linearization paper and follow-up paper on understanding hierarchical learning. (This post is also cross-posted at off the convex path.)

Consequently, a wide neural network trained with small learning rate converges to 0 training loss and generalize as well as the infinite-width kernel predictor. A detailed introduction to the NTK can be found in this blog post on ultra-wide networks.

Does NTK fully explain the success of neural networks?

Although the NTK yields powerful theoretical results, it turns out that real-world deep learning do not operate in the NTK regime:

These gaps urge us to ask the following

The key technical question here is to mathematically understand neural networks operating outside of the NTK regime.

Towards moving beyond the linearized approximation, in our Beyond Linearization paper, we started by asking the following question:

Why just $f^{(1)}$? Can we also utilize the higher-order term in the Taylor series?

At first sight, this seems rather unlikely, as in Taylor expansions we always expect the linear term $f^{(1)}$ to dominate the whole expansion and have a larger magnitude than $f^{(2)}$ (and subsequent terms).

We bring forward the idea of randomization, which helps us escape the "domination" of $f^{(1)}$ and couple neural networks with their quadratic Taylor expansion term $f^{(2)}$. This idea appeared first in Allen-Zhu et al. (2018) for analyzing three-layer networks, and as we will show also applies to two-layer networks in a perhaps more intuitive fashion.

If we train such a randomized network with freshly sampled signs $S$ at each iteration, the linear term $f^{(1)}$ will keep oscillating around zero and does not have any power in fitting the data, whereas the quadratic term is not affected at all and thus becomes the leading force for fitting the data. (The keen reader may notice that this randomization is similar to Dropout, with the key difference being that we randomize the weight movement matrix, whereas vanilla Dropout randomizes the weight matrix itself.)

Our first result shows that networks with sign randomization can still be efficiently optimized, despite its now non-convex optimization landscape:

The proof of this result builds on the quadratic approximation $E_S[f]\approx f^{(2)}$, and recent understandings on neural networks with quadratic activation, e.g. Soltanolkotabi et al. (2017) & Du and Lee (2018).

We next study the generalization of these networks in the context of learning low-rank degree-$p$ polynomials:
$$
f_\star(x) = \sum_{s=1}^{r_\star} \alpha_s (\beta_s^\top x)^{p_s},~
|\alpha_s| \le 1,~\|(\beta_s^\top x)^{p_s}\|_{L_2} \le 1,~p_s\le p~\textrm{for all}~s.
$$
We are specifically interested in the case where $r_\star$ is small (e.g. $O(1)$), so that $y$ only depends on the projection of $x$ on a few directions. This for example captures teacher networks with polynomial activation of bounded degree and analytic activation (approximately), as well as constant depth teacher networks with polynomial activations.

Theorem (NTK): Suppose $x$ is uniformly distributed on the sphere, then the NTK requires $O(d^p)$ samples in order to achieve a small test error for learning any degree-$p$ polynomial, and there is a matching lower bound of $\Omega(d^p)$ for any inner-product kernel method.

In our Beyond Linearization paper, we show that the quadratic Taylor model achieves an improved sample complexity of  $\tilde{O}(d^{p-1})$ with isotropic inputs:

When $r_\star,p=O(1)$, the quadratic Taylor model can improve over the NTK by a multiplicative factor of $d$, and we can further get a substantially larger improvement of $d^{p/2}$ by using the three-layer hierarchical learner. Here we briefly discuss the proof intuitions, and refer the reader to our papers for more details.

In this post, we explored higher-order Taylor expansions (in particular the quadratic expansion) as an approach to deep learning theory beyond the NTK regime. The Taylorization approach has several advantages:

We believe these advantages make the Taylor expansion a powerful tool for deep learning theory, and our results are just a beginning. We also remark that there are other theoretical frameworks such as the Neural Tangent Hierarchy or the Mean-Field Theory that go beyond the NTK with their own advantages in various angles, but without computational efficiency guarantees. See the slides for more on going beyond NTK. Making progress on any of these directions (or coming up with new ones) would be an exciting direction for future work.

Our Papers:
Beyond Linearization: On Quadratic and Higher-Order Approximation of Wide Neural Networks (ICLR 2020).
Towards Understanding Hierarchical Learning: Benefits of Neural Representations (NeurIPS 2020).