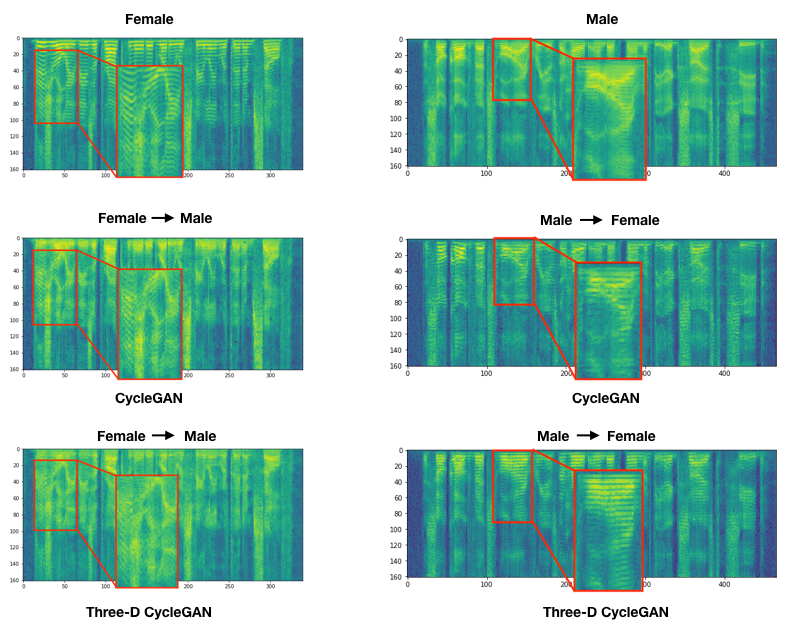 In the same way that human decisions can be influenced by cognitive biases, decisions made by artificially intelligent systems can be vulnerable to algorithmic biases. Because AI systems depend heavily on the data used to train them, any bias in the data can then bias the decisions that system makes. In order to build a neutral AI that humans can trust, it is imperative to detect and remove such biases.Here, we study the effect of gender biases in automatic speech recognition (ASR) models, propose an approach for removing these biases, and build a gender-neutral ASR model.

Neural-based acoustic models have shown promising improvements in building automatic speech recognition (ASR) systems. However, when evaluated on out-of-domain data, they tend to perform poorly because of a mismatch between the train and test distribution. Domain mismatch is mainly due to features that are described as ‘non-linguistic’ by the ASR literature:

Neural and statistical voice conversion (VC) has been widely used to adapt non-linguistic variations. However, traditional VC methods require parallel data of source and target, which is difficult to obtain in practice. In addition, the requirement of parallel data also prevents these methods from using more abundant unsupervised data. Because there is far more unsupervised data than supervised data, a method for unsupervised domain adaptation is desirable when building a robust ASR system.

We propose a new generative model based on the CycleGAN for unsupervised non-parallel domain adaptation of speech. A domain adaptation model should match or convert the characteristic features of data samples across different domains. By representing speech domains using spectrogram features, the main difference emerges in the frequency magnitude of the source and target domain. Therefore, it is imperative that a voice conversion model can convert this characteristic variation. Accordingly, a generative model, such as CycleGAN, should correctly model the spectro-temporal variations between different frequency bands across domains during training. This will allow the generator to learn the mapping function which can convert spectrogram from source to target domain. We show that the original CycleGAN model is failing to learn such a mapping function between domains.The generator collapses into learning an identity mapping function, which results in generating a noisy and unnatural-sounding audio. This problem is alleviated by using multiple discriminators. For more details, please see the paper.

Below, we compare the naturalness of synthesized audio samples, generated by CycleGAN and MD-CycleGAN for male↔female conversions.

Domain adaptation intends to improve the performance of an ASR model by matching the target and source distributions. In this section we define domains which are differentiated by gender type. To evaluate the performance of MD-CycleGAN on domain adaptation, ASR performance is assessed on the converted domains. Split by gender type, we consider both train→test and test→train domain adaptation. In the former, ASR model is re-trained on the test-adapted train set, while in the latter, a more applicable case, ASR model is fixed and evaluated on a train-adapted test set. Below, we show the results on TIMIT and WSJ datasets. TIMIT dataset contains broadband 16kHz recordings of phonetically-balanced read speech of 6300 utterances (5.4 hours). Male/Female ratio of speakers across train/validation/test sets are approximately 70% to 30%. WSJ contains ~80 hours of standard si284/dev93/eval92 for train/validation/test sets, with equally distributed genders. It is worth mentioning that MD-CycleGAN is only trained on the TIMIT dataset, and when used on the WSJ dataset (Table 5), it generalizes well in adapting male and female domains.